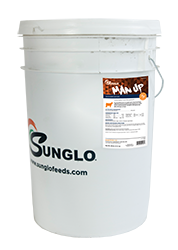 What type of cattle does Man Up™ work well on?

Ideally, like with any Ractopamine based product, you'll want to start with an animal that is sound, square, and functional. Our team has found that Man Up™ tends to work better on cattle that are later-maturing and lighter conditioned that need an extra punch at the end. However, it has been used with success on a multitude of types of cattle.

How does Man Up™ differ from Show Cattle Explosion™?

Man Up™ contains additional fat sources and was originally developed for the use on slick shorn cattle to be utilized as a drench since it is powdered and water soluble. Show Cattle Explosion™ (insert link) is time-tested and has fed as many winners across the country as any Optaflexx™ based supplement on the market. If you don't want to drench Man Up™, feed the pelleted Show Cattle Explosion™.

How much Man Up™ do I need to drench or feed?

Find your dealer: https://www.sunglofeeds.com/store-locator Learn more about Man Up: https://www.sunglofeeds.com/product/man-up 1. Sunglo Man Up is a Ractopamine product unlike any other. While it aids in the development of muscle shape and mass, it also assists in laying down a smooth finish that gives you that high quality fat steer look. 2. Sunglo Man Up can be given in either a top dress or drench form and is recommended to be used the final 28-42 days to help him Man Up. 3. If you choose to drench, simply mix 16 ounces of Man Up with at least 300 ml of water. If you choose to topdress, add 16 oz of Man Up to your feed to achieve the recommended 430 mg of Ractopamine. Pro Tip: If you choose to drench, add warm water to your mixture until it meets your desired consistency. Be sure to utilize the entirety of your drench mixture. As a reminder, please check your show rules before drenching.

This product hasn't received any reviews yet. Be the first to review this product!